Skip to content
Integrating Your Work With git (1/3) – Merge

When you’ve built fixes or features, you want to integrate them with the main line of development, generally the “master” branch. Git offers multiple ways you can go about that task. Let’s take a look at your options using a little sample repository. 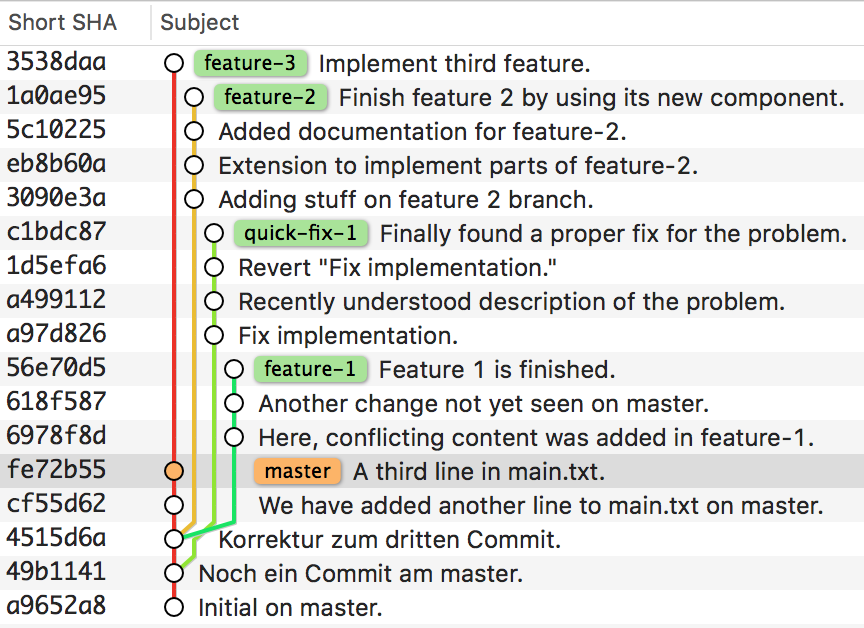 This is, in a way, the “default” way of integrating changes. The command is even called merge!

Of course, many times there will be conflicts, so the sample makes sure we’ll have conflicts to resolve, too! I just ask git to start my configured merge tool for all files with conflicts:

Resolving conflicts through git can be done manually, but that is very inconvenient. For a better user experience, git supports many different tools for resolving conflicts. A full list is available under the configuration documentation for merge.tool in the on-line help forgit merge, which you can access using git help merge. I useopendiff because it is available by default on Macs with the developer tools installed and I am reasonably used to it. There are many other options though, take a look! When you have made your choice, you can configure it for your account using git config --global merge.tool chosen-tool

git tells me that it starts merging with main.txt. “Local”, in this context, means the branch we are on; “remote” is the branch that we want to merge. After these messages, git starts the opendiff program for me, or whatever three-way-merge tool you have have configured:

Once we’re done merging, we save the results and quit the merge tool. Git helpfully warns us that the result seems unchanged, and whether we want to restore the state before the tool was run, if the result is unchanged. It will also ask whether we even want to attempt to merge other conflicts in that case.

I just performed a sample merge and git drops me back to a shell prompt. Let’s take a look at git status:

We can see that shows us that the merge has not been concluded, but the conflicts are already resolved. There’s also a .orig File with the unmerged contents:

This is nice for a final comparison if we’re unsure about our merge, but in a real project we might have a lot of resolved conflicts scattered over a large directory tree. Let’s get rid of this untracked file and do what git says to finish the merge:

git prefills the commit message with a note what we merged, with some helpful comments about what we did, what we’re about to do and the affected files added below:

When we just save & quit, git performs the merge commit and we get a short confirmation message:

After we repeat the process with the other branches to merge, we get the following history structure: 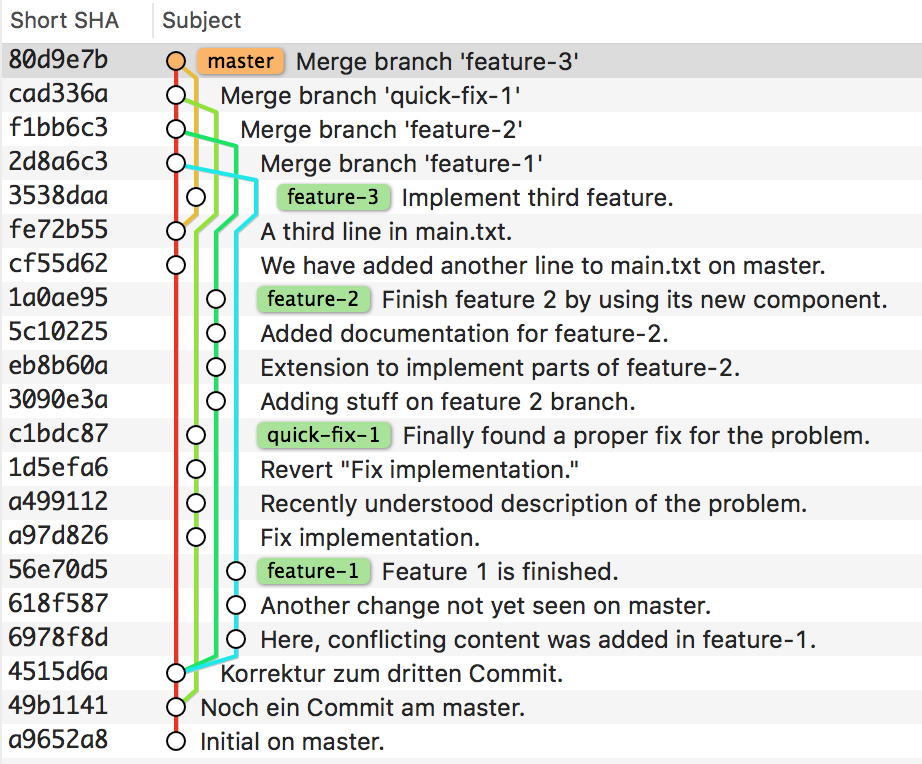 Merging like this is fairly easy for most users, and it has definitive benefits:

These benefits have several drawbacks following from them, however:

If changes can be merged without any conflict, they can be octopus merged. If we didn’t have any conflicts in our branches, we could e.g. do git merge feature-1 feature-2 feature-3 quick-fix-1.

This would cut down on the number of merge commits & save some time. Since it’s only applicable when there are no conflicts, it is rarely applicable, alas – something of an edge case.